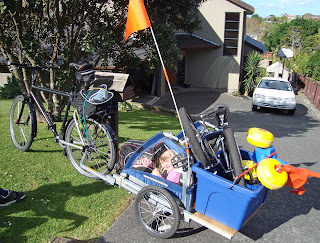 Arriving home from "official" unicycle club after school. My D.I.Y. trailer extension is a bit overloaded here and tends to push up on the hitch when I have this much weight in it. Really needs the axles moved further back.
Not much has been happening on the cycling front this month apart from the usual trips to the park with Carla and commuting to work.
The unicycling obsession has continued though and despite horrific injuries to the backs of my legs, my groin and my pride, I have persevered and am finally making some progress. It's not like me to stick at something I'm not enjoying but I am determined to give it a good shot while we have the use of loaner "bikes". We are not in a position to buy any at the moment, but if the kids really get into it I might keep an eye out for second-hand ones at the right price.
I have managed to stay on for 80 - 100 metres on a few occasions and tonight rode for a very wobbly 60 seconds. I'll take that as progress even though I don't feel confident at all and zig and zag all over the place. 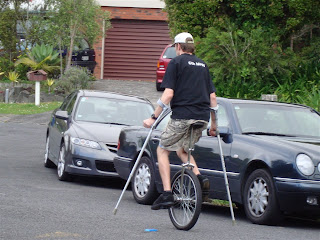 Laugh if you must! I'm going to need crutches sooner or later anyway. An hour of this got me traveling further without constant restarts and I'm riding unassisted now. 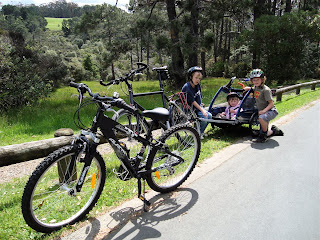 Riding through our local park on the way to school for a unicycle practice. The school is great as it has large areas of flat asphalt and lots of handrails to grab onto when you are first learning.
Hunter and Finn have not put as much time into practicing as I, but are coming along great. Finn has ridden 40 metres or so and Hunter about 10. It seems to be a mind-over-matter thing as some days you can't ride more than a few feet and start to get angry with yourself, and other times you can ride a considerable distance with relative ease.
It has been hard on my body though! The backs of my legs are covered in scrapes and pedal-bites from the inevitable wipe-outs. I usually land on my feet but sometimes the uni gets stuck underneath you and you fall on top of it. The other problem is the "jumping off to save myself routine" really aggravates my bad ankle. Its been a year since the operation and I'm sitting here typing this with my foot in a bucket of ice-water to bring the swelling down. That's after only an hour of practice, but once I get the hang of it I think the ankle will cope. I don't get much pain cycling anymore until after a long ride. 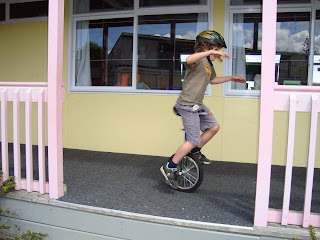 A week of bicycling

Lots of riding done this week. Commuting duties, daughter hauling, food shopping, two lots of mountainbiking and unicycle training. My legs are all worn out! 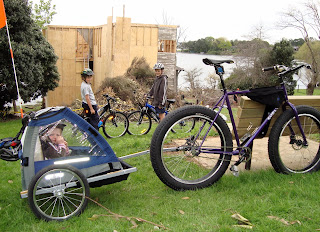 A visit to Lake Pupuke to look at the movie set of "Under the Mountain" being taken down.
My sons have joined the school unicycle club and have loaner bikes (they're not really bikes, are they?) to get the hang of it. How cool is that, a primary school with a unicycle club. On mondays the school bike-rack has as many unicycles as bicycles locked-up in it.
Have you ever tried to ride a unicycle? I'm giving it a go as well, but seem to have made no progress at all, it's damn hard. I can ride a two-wheeled bike on one wheel no problem, but I'm finding it a great challenge on the real thing. A circus career is some way off.
I have learned one thing: When you start to fall, don't try and catch the unicycle. I read this on some internet instructions and ignored it to my detriment. I ended up in a pile on the garage floor with the uni on top of me and a gored leg from pedal-bite. I will let it drop next time!
Surly actually make a muni (mountain-uni) called the Conundrum which has the same Large Marge/Endomorph wheel as the Pugsley. Now that would turn some heads. 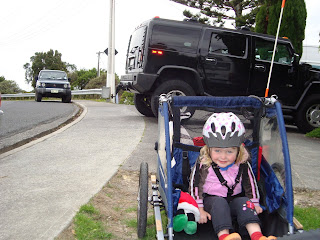 Bad drivers with small penises and stupid vehicles have made it down to our corner of the South Pacific. Look how this mental-midget has parked across the footpath.
I took Thursday off work to look after the boys as it's school holiday time and we went out to Woodhill Forest to the mountainbike park. Finn and Hunter aren't keen cyclists but they enjoy riding out there and we had a lot of fun together.
Finn and I got shown-up by eight-year-old Hunter attempting every jump and structure he came across, so we were shamed into trying some of them. I rode a lot of stuff that I would normally avoid and gained some confidence, but I think one metre off the ground is about my altitude limit. I must be getting old. 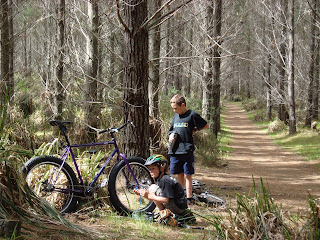 Thing-Two stealing water from my Camelbak
I went out to the same forest yesterday with my friend Murray and had a good 2.5 hr ride at a much faster pace. Last night my thighs were sore like I'd been to a gym or something, but I feel fine today. The great thing about Woodhill is it's a plantation pine forest effectively planted on coastal sand dunes, so the soil is very free-draining, even in the middle of winter, and just about never gets muddy.
The park is run as a business and you have to pay to use it, but the trails are fantastic and well maintained. It's $6 for adults and $4 for ten and overs which I think is reasonable. If it was more expensive I would go less. 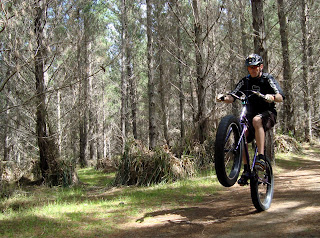 Showing-off for the camera
Posted by Antoine at 2:37 AM 9 comments: