Butt Service – aka: Why are all roadies assholes? 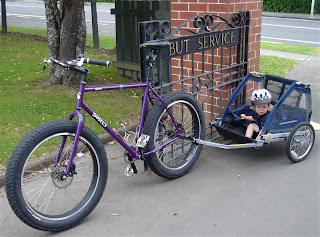 My digital camera has died, so with no new new pictures to post it's time for a rant.
In the lead-up to the singlespeed champs I was riding a lot more than I usually do. I even got a couple of half day passes from Margaret to go out for a two or three hour stint, which is unheard of in my normal weekly routine. It was great fun and I was happy to just be out there on the roads exploring some local areas I hadn't had a chance to look around previously.
Now I'm a little shy, but when I see another cyclist I say hello or at the very least give a wave as we pass. I come from a motorcycle background and there's a real camaraderie in those circles. On the open road you always acknowledge other riders, be it a tattooed grandfather on a Harley or a skinny fifteen year old boy-racer hunched over his 125 like a dog humping a cricket ball. We are all having fun on two wheels and we are all targets for idiots in cars.
Mountain bikers are a bit like that too. Not as much as when I started in the early 90s, but they are still pretty friendly no matter what you are riding.
Road riders on the other hand seem to have a chip on their shoulders. I suspect that a lot of the lycra-clad assholes I run into on my neighbourhood roads are not really "cyclists" at all. By cyclists I mean people who love riding bikes, and as an extension of that love the bicycle.
I have a theory that a large percentage of these guys (and it's usually guys) are actually car drivers in disguise and are riding for two reasons only:
1. So they can LOOK and BE cool (just like Lance except he's a cheating, lying bastard) and
2. For the fitness benefits (substitute for dressing in lycra at the gym to LOOK and BE cool).
Now don't get me wrong, I'm a huge fan of road racing. I love Le Tour. I love their sleek carbon machines. Even though I don't want one I can appreciate how fast, light and efficient they are. What I don't like is the riders attitude.
I did a little experiment on one training ride. I shouted out a friendly good morning to every rider I came across on my Saturday morning loop. The first thirteen riders passed within earshot without one single response. Not a nod of the head or the wave of a hand. Nothing!
I don't know if the results would be different if I was riding a road bike instead of a monstrous purple mountain bike but by the time I got to Devonport I was getting a bit grumpy myself.
Rider number 14
Rider number 14 was not going to ignore me. I was going to force him to talk!
I met rider number 14 on a short steep access road on North Head. North Head is a small volcanic cone that was heavily fortified to protect our harbour in the late 1800s. I was riding up the road to the summit at 8.30am and there was not a soul around. It was dead quite and I was enjoying the pain of grinding a heavy singlespeed up this climb when a roadie slowly overtook me without saying a word and just kept on riding. I saw red. I put on a burst of speed to catch him and verbally assaulted him with friendly small-talk. I made a real effort to breath easy and disguise the pain I was in as I could see he was hurting. Once I got him talking he even mentioned that he had noticed I had no gears and my tyres were very fat. Shame he hadn't thought to mention that as we almost rubbed shoulders on the initial encounter.
Well he seemed like a fairly nice guy once I got him talking so I let him off with an attitude warning and started for home... eight more riders were encountered without a single response. I got home a little depressed and formulated a plan. I'm not going to beat myself up trying to teach these people manners. That would be pointless. What I am going to do is fight them at their own game and wipe the road with their entrails.
I'm looking at getting a Surly Cross-Check at the moment. It looks a bit like an old-fashioned road bike but is tougher and you can ride them off-road as well. Not as light as a road bike, but still pretty fast. Mine will have mudguards (fenders)... Mine will have a rear rack... Mine will have a case of beer lashed to the rack... That case will not contain beer but will contain polystyrene... It will be ridden by a tall skinny guy in casual clothes and sandals... That tall skinny guy will blow past these bastards uphill, traveling so fast that pursuit will seem pointless... That tall skinny guy will give the impression that he is not even trying... You can tell he's not trying by the size of the smile on his face ;-)
Posted by Antoine at 3:27 AM 12 comments:

I have just sold my first child

Every now and then my wife reminds me (in that gentle but persistent way that they have, like a knife pressing between the third and fourth ribs) that my beloved motorcycle is sitting in the garage unused and I should really get rid of it.
"How can I sell the most beautiful thing I have ever owned?" "How can I sell the bike I was going to keep for life?" "An Italian classic, a life long dream, an extension of my manhood..."
I'll tell you how: Since the birth of my eldest son 10 years ago it's hardly got used, it's expensive to maintain and insure, and it's slowly deteriorating from sitting idle. I don't have any free time to myself to ride it for pleasure and it's too big and unpractical to commute on. The bike corner
Motorcycles have a similar appeal to bicycles for me. I've been riding them since I was 15 and they are a life long passion. It's that unbridled sense of freedom. Fresh air you can actually feel on your face. You can taste, smell and hear the world around you and there's no such thing as a traffic jam.
If you like a bit of excitement in your life it also doesn't hurt that a reasonably priced motorcycle will out-accelerate a Porsche or Ferrari.
I first started cycling as an adult in the early 90's, not long after buying the Moto Guzzi above. What I really wanted was a trials motorcycle for off-road competition but that involved buying the trials bike, a trailer and a car to tow it with. I was working with road cyclists and mountain bikers at the time and was talked into getting a mountain bike instead and going racing. I was hooked! I'm still riding that bike to this day and I now have another obsession.
So it's out with the motorized version and I now have a little extra cash to invest in one of the pedal-powered variety if I can get that knife out from between my ribs.
Posted by Antoine at 3:13 PM 5 comments: