One of my recent photos of Thing-Two has been picked up by the excellent Change your life, ride a bike! blog for their "Photo-of-the-week". We made this robot suit for a school book week parade and I wanted to get some fun photos of it for posterity. 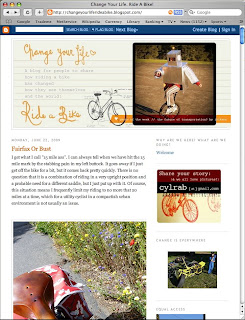 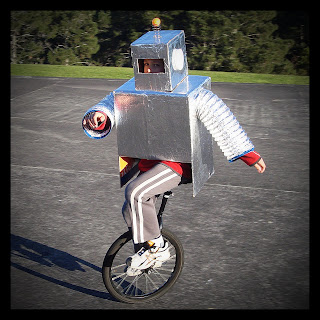 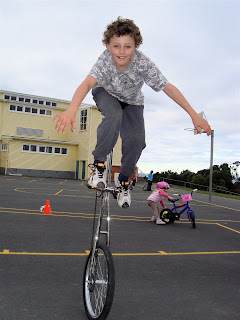 Robot-free at unicycle club. The Midget Assassin having cone-avoidance-difficulties in the background.
Posted by Antoine at 2:01 PM No comments:

Caught in the Helmet-War Crossfire 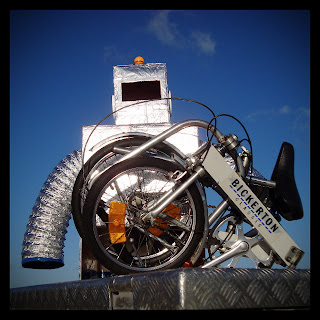 To helmet or not to helmet? A question thats been floating around in my head this past year. Of course it's illegal to not wear one in New Zealand, though I don't know how vigorously the police enforce that law.
I recently left an innocent comment on copenhagenize.com, a site run by my old Flickr contact Mikael. Just a couple of anecdotes from my past where I felt a helmet had saved me at the very least a fractured skull, and in one of my motorcycle accidents I'm pretty sure it saved my life. For balance I mentioned that I don't think they should be mandatory and I certainly agree with the anti-helmet brigade that regulating helmet use reduces the number of potential cyclists in a population.
Well this is obviously a passionate subject! Insults were flying in both directions, examples made to support both arguments and statistics twisted to fit all views.
I'm so keen on all forms of cycling that I don't like to see us arguing amongst ourselves, but it is a subject that needs debate - rational debate.
So I walked away from this fight for now, a little gun-shy but determined to learn more about the subject.
What's your opinion?
Posted by Antoine at 4:01 AM 8 comments: 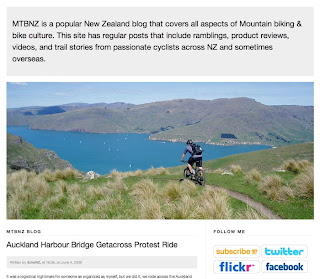 I was recently asked If I wanted to contribute some posts to the Mountainbiking New Zealand blog. If some of my stuff starts sounding a little poncy and formal (like the last review) It's because I'm thinking more than six people might end up reading it!
I was very flattered of course, but as I alluded to in an earlier ramble I then realized I didn't actually get around to mountainbiking much anymore, despite it being one of my passions.
Still if "real" mountainbikers are interested in the rantings of a forty-something-kid hauling-grocery shopping-singlespeeding-commuting-snowbiker than so be it. I'll soon take the hint if no-one reads it ;^)
Posted by Antoine at 3:25 AM 1 comment: 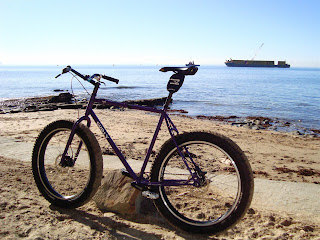 Buying something you don't need
I saw these in the bargain-bin at a local bike shop. They were still there a week later and temptation got the better of me and I thought I'd give them a go. I've been wanting to try an Ergon with the distinctive  flat palm rest but they are an expensive purchase in New Zealand for something that might not work out. The GE1 model is marketed for freeriding and downhill but I'm sure they will work just as well for everyday riding. 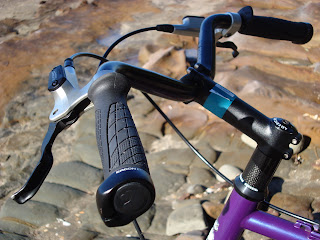 The large clamp on the outside of mine has been slimmed-down on the new 2009 model
It's not like I actually "needed" new grips, I've been more than happy with the Lizard Skin Lock-On's I've been using for the last three years. I've never had any hand or wrist pain and the only improvements I would wish for on the Lizards Skins are slight increases in length, grip-diameter and softness. The ODI style of Lock-On grips are not as soft as standard versions because under the rubber is a hard plastic sleeve that slides onto the bars and gets clamped at each end. I much prefer them though for the ease of taking them on and off and the fact that you could ride underwater and your grips aren't going to twist in your hand or slide straight off the bar. Two frequent happenings when I used to race in wet Auckland winters.
Installation
Installing them was straightforward with a quick wipe-down of the bars with spirits and then gently twisting them on. I had to look at the pictures on the website as I didn't think the large flange on the inside should be poking upwards, but that's what it does and the orientation marks on the outside of it backed this up. The grip is secured at the outside only with a single clamp. I'm sure you could crush a carbon or lightweight alloy bar if you overdid it as the hex bolt is pretty big and you could really apply some torque to it.
How do they feel?
Weird, but natural at the same time. The contouring looks very subtle to the eye but your hands can tell the difference at once. I measured the circumference at 10cm at the inside and it increased to 11cm in the middle portion. The grips on my other bikes measure between 9 and 10cm. There's a light grey panel of softer, tackier rubber in the area your palms rest on and this combined with a long grip-area provided ample comfort and hand positions.
The day after I fitted them we had a family mountainbiking day in Woodhill Forest so I got to try them out in anger. This is where I struck the first problem. It was a cold winter's morning so I was wearing light polyprop liners under my normal riding gloves. I'm 6' 5" with pretty big hands but I found it uncomfortable holding onto the larger grip diameter. I removed the liners and things got better but you would want to have large hands to fit the large size comfortably (they also come in small). When hitting stutter-bumps or landing a jump I could feel the pressure spread over more of my palm and I guess that is the whole idea. It still felt weird though and I think it's going to take more than a week to get used to them.
The larger diameter also caused me problems on a beach-ride the following day. Very comfortable when just cruising along but when I had to stand and hammer for extended periods to get up and over the headlands (I'm riding a singlespeed) I just didn't feel as secure. My middle fingers were wrapped around and touching the base of my thumbs but I ended up sliding my hand inwards to the narrower area by the flange to get more purchase. This is the opposite of what you are usually doing when climbing on a singlespeed - i.e. sliding your hands to the ends of the bars to get the most leverage possible.
The Verdict
These sizing issues aren't the fault of the GE1 of course. I think it's a sound design and just a little large for my hands riding in gloves. On my commute to work they feel just fine and I think I'll leave it a few more weeks before passing final judgement.
One thing I will pass judgement on is the ridiculous packaging they came attached to. A total waste of plastic, cardboard and metal bolts that looks cool hanging on the wall of a bike shop but is completely unnecessary. 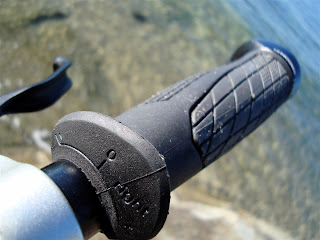 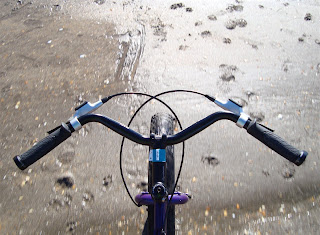 There is a specific left and right grip, just like pedals
Posted by Antoine at 2:00 AM 6 comments:

Lets just start by saying I don't give a damn how old Betty Windsor is, but for reasons unbeknown to me New Zealand celebrates her birthday each year with a public holiday. It's not even observed on her actual birthday, but I'll take a day off mountainbiking with my kids over working any day.
We live in a very social street with lots of kids and lots of cyclists. Every month in summer and more sporadically in winter a few of the families meet at the Woodhill Mountainbike Park for a family ride. It's not too taxing, usually a two hour ride followed by a two hour barbecue, pine-cone fight and a re-hydration session for the telling of tall tales. The rider who has the most spectacular crash or sustains the most horrific injury is awarded the "Kamikaze Trophy" and a chocolate bar to ease the pain.
We had the coldest night of the year in Auckland where the temperature plummeted to 4ºC (thanks to some winds blowing North off Antarctica) but Monday morning dawned crisp and clear and the sun stayed out most of the day.
I might ride the Pugsley fixed next time as you don't get much of a work-out riding with kids, even on a 36lb singlespeed, but I had a great time and look forward to the next one.
My two boys are not as keen on cycling as their father, but with a dozen of their friends around there's always someone slower than you to pass and someone faster to chase after. It's fun and motivating and they always have a blast. 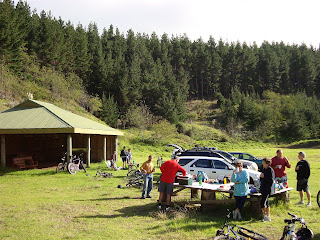 We just about had the lower car-park to ourselves. 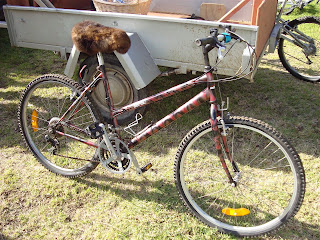 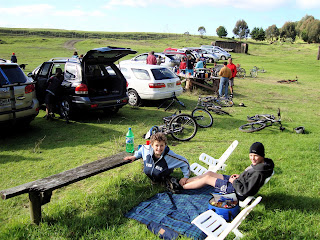 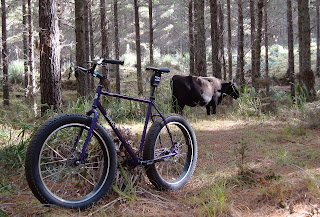 Some extra trail-obstacles out there today. 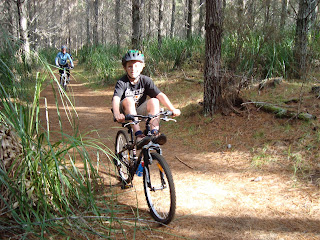 Thing-Two performing for the camera. 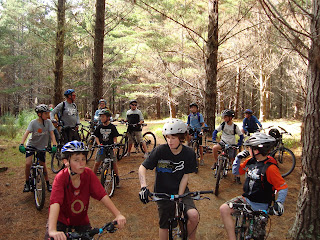 Waiting for the stragglers.
Posted by Antoine at 4:10 AM 1 comment: