I got up at the unnatural time of 6am this morning so I could join the "Go by Bike Day" group ride into Takapuna. This is a community event held nationwide to encourage cycling, and specifically bicycle commuting. There were two groups riding into town from different directions and when we got there the organisers provided a free breakfast, coffee, bananas, massages, helmet-hair fix-ups, bike checks and a goody bag. 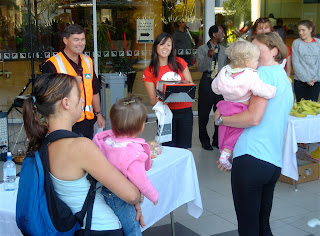 I rode the Pugsley with my 34/18T "road" gearing and it was hard work on the hills at that time of the morning.
The lycra-clad roadies just didn't get a guy riding a 36 pound singlespeed, but I had a few friendlier people come up and ask me questions about the bike. You get used to that riding a Pug. There were 350 cyclists at our local event. 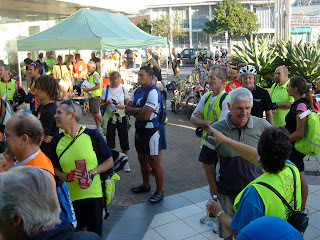 When I got to the meeting point for the ride in It was just getting light. I thought I had the wrong day until I spotted a lone rider behind the coffee cart. The third rider to show up was the Mayor! I had a chat to him about the new local bike lanes. There has been a lot of controversy about the effect they are having on the rush hour traffic. He was probably just gathering votes, but was quite approachable and had made the effort to get out of bed early and dust off his old mountain bike. 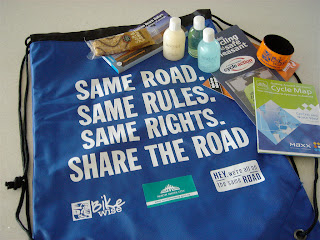 The goodie bags were a bit sparse this year. Last time I got a Cat Eye rear blinky that I use all the time. This year it was bottles of shampoo and conditioner. What's with that? Are they implying cyclists don't wash?

The bagels were good. The coffee was good, and It was fun to ride with other people on the road for a change.

After stuffing my face, chatting to a few people and listening to the mayor's speech, I had to ride all the way back past where I had started to get to work by 10am. I have to work until 10pm tonight, but it was worth it.
Posted by Antoine at 4:11 PM 6 comments:

Getting dirty with the neighbours

We live in a really friendy street. There's only about 18 homes, lots of kids, and as you would expect we all know each other pretty well. What's unusual is that we all "LIKE" each other as well. That's not so common nowadays. It's also a very bike-friendy street and just about everyones got a mountain bike. 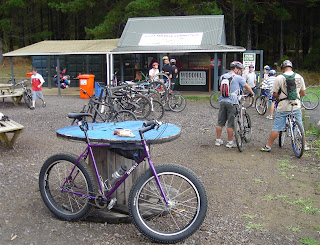 In the summer, once a month or so, four or five families go off to our closest mountain bike park for a group ride. It's a fun day and as one neighbour has a motorhome there's usually a BBQ and a few drinks at the end of the ride.
The Woodhill Mountainbike Park is about a 40 minute drive from our place, but it's very well set-up, only costs me $6 to ride all day and the kids are free. The trails are on a pine forestry block planted on coastal sand dunes, so even when its been raining for days (as it has been here) there is no mud, no puddles and the trails are actually faster with the damp sand.

My two boys are 7 and 9 and are not obsessed with cycling like their father. This is a good opportunity to get them out riding with me and having fun without it becoming a chore. I don't get a chance to do much off-road riding as I look after my daughter on my days off, so this is good training and good fun for me also, although we ride pretty slowly and stop often to wait for stragglers. 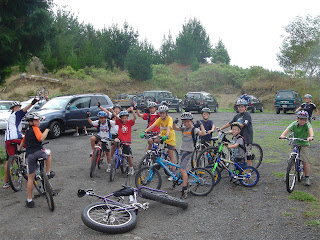 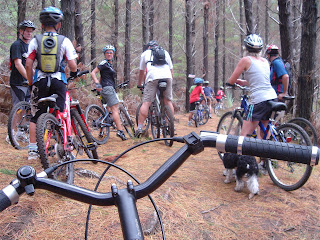 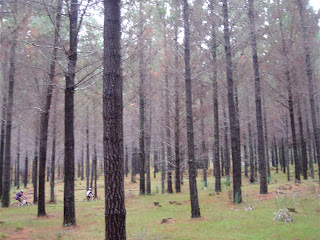 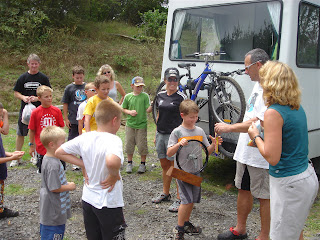 We award a "Kamakazi Kid" trophy each time for the most impressive crash or the most blood spilt. Callum was the winner today. We had a remarkable lack of carnage on this outing so he got the award for good sportmanship and top riding skills.
Posted by Antoine at 12:45 AM 2 comments: 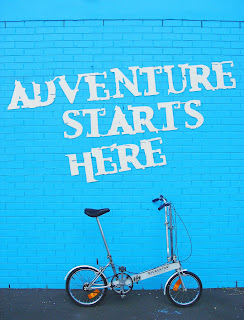 I'm in my third cycling cycle.

The first was in childhood. My dad bought a little red bike for my birthday off a Japanese guy on a cargo ship. I would have been five or six years old. I fell in love. It was candy apple red and had a chrome siren on the bars that you controlled from a button by the handgrip. I loved that bike more than anything in the world and I got to ride it for a whole fifteen minutes before it was taken away from me! I was too tall for it. A problem that plagues me to this day. I had to wait another year for my next one.

The second cycle was in my mid twenties. I worked in a design studio with a teenager so enthusiastic about bike racing that the majority of staff ended up getting into cycling without really trying. Before we knew it even the owner had bought a fancy road bike and we were organising company cycling events for our clients and their families. I bought my first bike as an adult and started mountain bike racing with the guys from work. I'm still riding that bike fifteen years later.

I'm in the third cycle now. I can't remember how it started but I got wind of the singlespeed movement. I sniffed around the internet and found Sheldon Brown's site. All the information I needed was there. I purchased a Surly Singleator to convert my bike from Harris Cyclery and I was hooked. People talk about the zen of fixed gear riding. Well I think the same thing applies to singlespeed mountain bikes. The simplicity, the silence and the extra effort required makes for a special experience. You just zone-out and forget about the bike completely. It's more like running than cycling. That was three years ago and I'm totally obsessed with cycling again.

I'm going to share some of my cycling adventures on this blog.
Posted by Antoine at 2:11 AM 5 comments: