I was not there. That was a bad decision on my part as the following photos by Graeme Murray and Mike Vincent prove, but I have a cunning plan for next year. 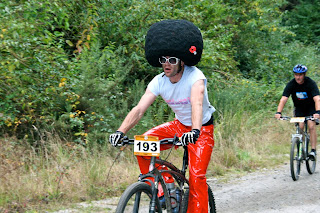 This guy gets my vote 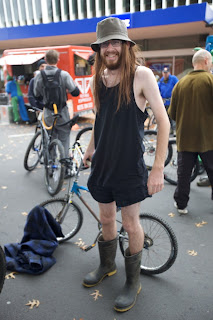 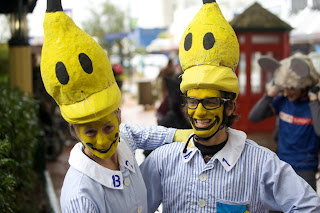 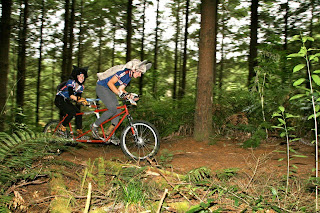 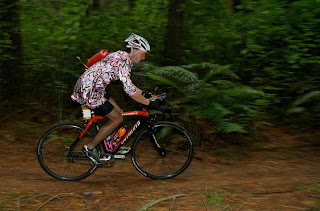 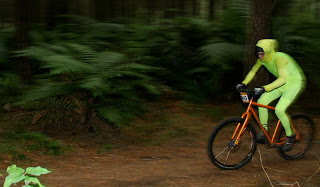 Neon Sperm (hell, that was my best guess) 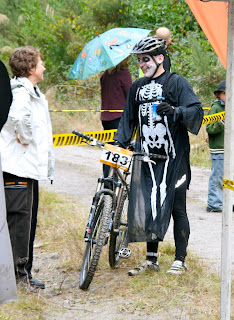 One of the older competitors
Posted by Antoine at 12:11 AM 4 comments: 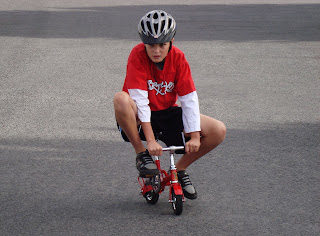 Thing-One puts the Micro-bike though its paces.
I took some time off work to look after the kids during the first week of the school holidays. Luckily for me our local council puts on a Kids Bike Day a couple of times a year and if you pre-register it's absolutely free. Thing-One and Thing-Two at 10 and 8 fell into the 7-12 year age range so we packed up the bikes and headed down to Onepoto Basin for a fun day in the sun.
Onepoto Basin is a crater formed by a Volcanic eruption. It is just above sea-level on the edge of Auckland's Waitemata Harbour and has been filled in so it's almost flat with the crater rim running three-quarters of the way around it's edge. After the last post it must be the time of year for bike events on volcanoes, but in Auckland you're never too far away from one, we have about 50 of them.
The crater is parkland with bush walks, sports fields, a pond for remote-control yachts, a playground and most importantly a series of bike-paths set-up like roads for children to learn to ride in safety. It has been really well designed. 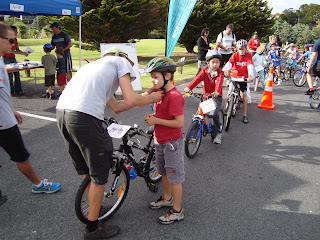 The day started with a bike and helmet check then there was a unicycle demonstration. This guy was pretty skilled and the children were very entertained by his act with plenty of yelling and applause. Afterwards you were encouraged to give it a go but the boys and I were the only ones there who could ride one. Thing-One and Thing-Two thought they were a bit special as they zipped around riding the different uni's on offer. Truth-be-told I did too!
The kids were then split into groups and moved through six different modules with a free morning-tea somewhere in the middle. There was an obstacle-course, bike maintenance, rules of the road, bike handling, follow-the-leader and a bike-safety questionnaire. Lots of fun and I think they learnt some bike safety and skills without even realizing it.
There is another one at the end of the year and my two are dead keen to attend again. That makes for one happy (cycling-obsessed) dad. 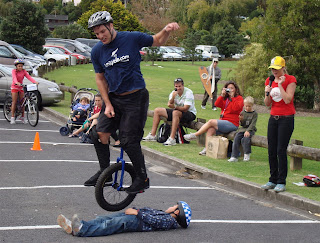 The mandatory kid-jump. I'm still waiting for one of these to go wrong. 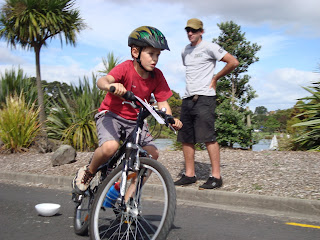 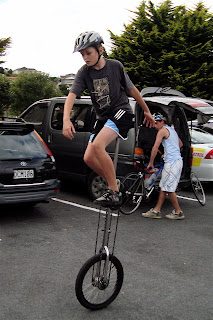 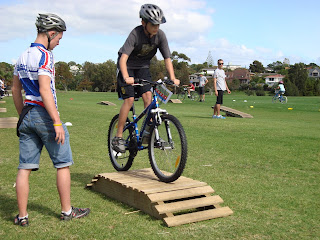 The Obstacle Course. Some children had no idea how to ride the ramps and see-saws but there was plenty of help on offer and a soft landing if you got it wrong. 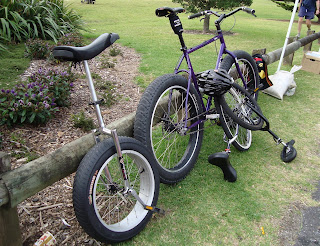 I got to ride a unicycle with a tyre that made the Pugs look positively anorexic. 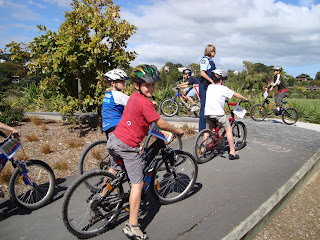 Learning to give-way on the road rules course. The police were there helping on this module. 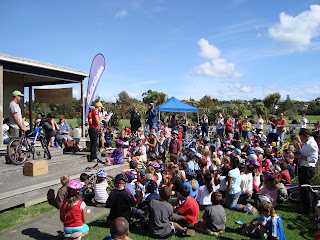 And finally a mountainbike was given away to one lucky child.
Posted by Antoine at 1:31 AM 5 comments: