Illegal Bicycle Activity in the City of Sails

Well, it was a logistical nightmare for someone as organised as myself, but we did it, we rode across the Auckland Harbour Bridge!
I had the bikes already mounted on the car when we awoke to beautiful winter's morning. Cold, but fine and sunny. The scheduled ferry services from the two closest wharfs were very spread-out on a Sunday so we drove down to Devonport to catch the 8.30am ferry to downtown.
Thing-One and Thing-Two enjoyed the harbour crossing and it was a little unique to have the boat full of cyclists. The bike racks onboard filled-up instantly and there were bicycles and lycra-clad weirdo's strewn all over the place. I took a chance and purchased one-way tickets ($12!!!) for the 10-minute sailing to the city. Some folks were buying return fares as we weren't sure if they would let us across the bridge or not.
After a quick 10-minute ride through an empty city we arrived at the rallying point at the foot of the bridge. 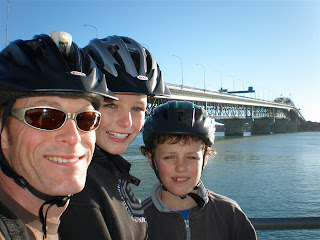 A quick family portrait before joining the crowd of two or three thousand.
I was getting excited at this point in anticipation of riding over this thing for the first time in my 43 years. The bridge is 50 years old this week and it's still only available to cars, trucks and buses (buses with no bike racks!). The original design had provision for pedestrians and rail but the budget was slashed before construction began. Typically small-minded thinking from those in charge of New Zealand's largest city. 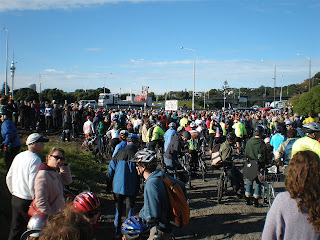 The crowd listened to the speeches and then started to get a little agitated as we were told by the organisers that we would not be allowed  to cross. The police were willing to provide safe passage but Transit New Zealand were refusing permission. 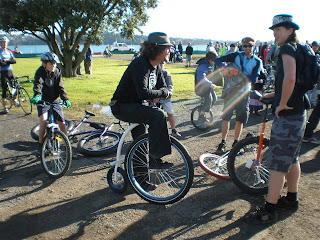 Thing-One hangin' with some unicyclists as we were waiting for the go-ahead.
As negotiations continued a roar went up as a bunch of roadies appeared over the guard rail and sprinted straight up the left hand lane of the bridge. This caught the police napping and they took off in hot pursuit after them.
Word then filtered through the crowd that it was all go and we slowly shuffled around the (hastily erected) barrier-fence to gain access to the bridge on-ramp.
At this stage I had assumed, as most of the crowd would have, that permission had been given for the crossing. We found out later that night that the police had been forced to shut down all the Northbound lanes when the lead-riders ignored the police road-block and broke through it.
It's a great feeling being surrounded by a large crowd of people with a combined purpose. You feed off each-other's energy and there was real party-atmosphere up there on the bridge that morning. 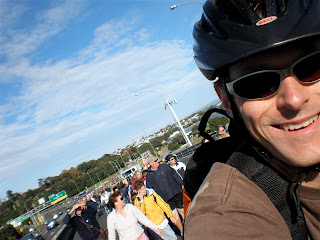 The crowd was a real cross-section of society. Everyone from babies in strollers and on the back of bikes to walking seniors. Lots of children were out strolling with their families and plenty of young cyclists were having fun zipping in and out of the masses.
On the TV news that night, and in the paper the next day you would have thought we were a riotous rabble of anarchists. The media really put a negative spin on the whole event when in-fact it was just everyday Aucklanders getting out and enjoying the access we should have to our only harbour crossing. 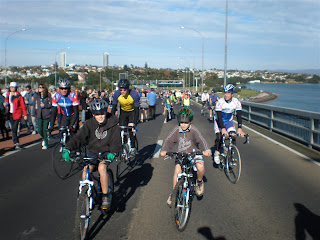 It didn't look like many people when we were all standing around waiting, but by the time we all got up on the bridge we filled the whole thing up, all 1.2 kilometres of it. It was an impressive sight and the Waitemata Harbour was just stunning from up there. 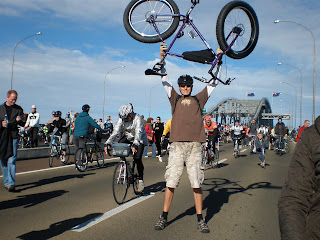 You tend to stand out in a crowd when riding a Pug and a lot of my friends from the cycling community, local bike shops and even contacts from the internet came up and said hello.
Jakob was there on another Pugsley, or should I say "the" other Pugsley and he was singing the praises of running the Endomorph's tubeless. You save half a kilo on each wheel but I'm not sure I can be bothered changing at this point, I've only had one flat in three years after all.
Before we knew it, it was all over and we had reached Northcote Point on the other side. I did a few wheelies in front of the advancing police line for the cameras and then it was time to head full-circle back to Devonport.
The protest had delayed the traffic for 1.5 hours and there were a lot of pissed-off drivers stuck in the jam. I sympathize with them but you have to stand up for what you believe in and it's only by actions such as this that opinions change and things actually get done.
The motorist traveling in the opposite direction gave us lots of support and there were no end of waves and tooting horns as we made our way across. 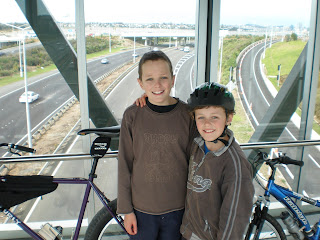 On the way home we rode over the new pedestrian overbridge to the Akoranga Bus Station... 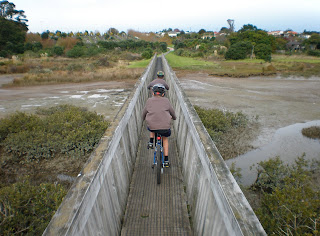 Across the long bridge to the O'Neill's Point Cemetery... 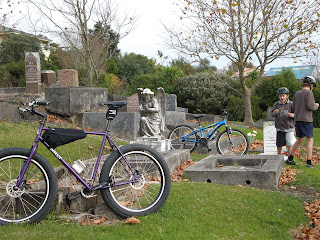 With a quick candy-break amongst the headstones... 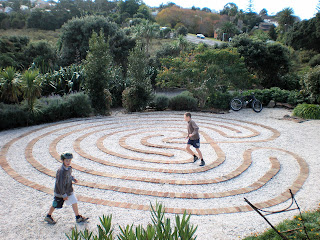 And a detour past the Devonport Labyrinth...
...Before arriving back at the Ferry terminal to collect the car. We also had two bakery stops to fuel those eight and ten year old legs and stop-offs at two playgrounds. When you're riding anywhere with kids it takes you twice as long and costs you twice as much!
What a fun day we had and I'm looking forward to the "next" bridge-ride, although I suspect the police will take a much harder line in the future.
(I seem to have stuffed-up the links when I was rearranging the photos. If you want to see them big they are all on my Flickr photostream.)
Posted by Antoine at 3:09 AM 4 comments: 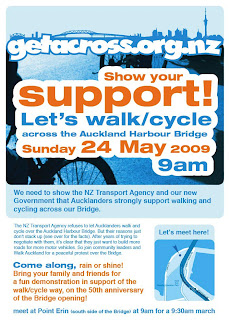 I have to work out a way to get a myself, my 8 and 10 year old sons and our three bikes to the other side of the harbour, but we will be there. I feel strongly about this cause.
http://www.getacross.org.nz/
Posted by Antoine at 3:39 PM 1 comment: 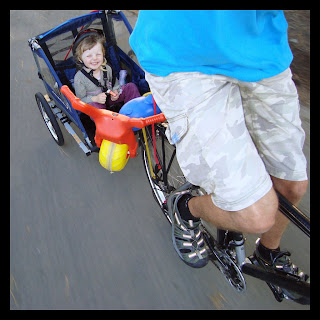 Hauling the Midget-Assassin home from unicycle club
It's come to my attention lately that although I've always classified myself as a "mountainbiker", I don't actual get much opportunity to go mountainbiking.
This became apparent when Paul from the mountainbikingnewzealand blog kindly invited me to contribute some of my posts and I've had nothing relevant to write about since!
Around the same time a good friend purchased a beautiful new Haro MTB and I still haven't had a chance to see it, let alone go riding with him. That's the problem with work and kids - they cut into valuable cycling time and there's never enough money ;^)
So I guess 95% of my cycling could be classified as Utility and I'm just going to call myself a plain old "cyclist" from now on.
(But NEVER a Lycra-Cowboy)
Posted by Antoine at 5:44 PM 4 comments: