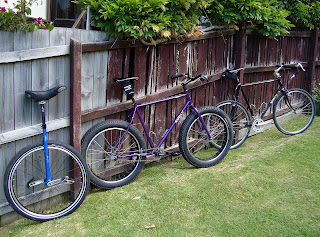 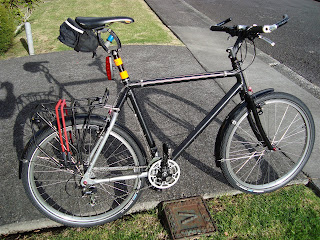 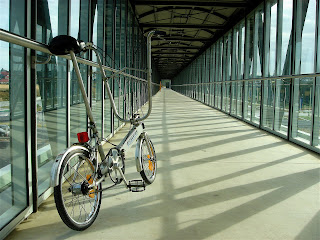 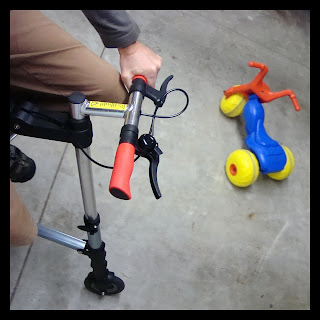 and not forgetting the 6 inch/spokeless monstrosity.
Posted by Antoine at 6:07 PM 5 comments: 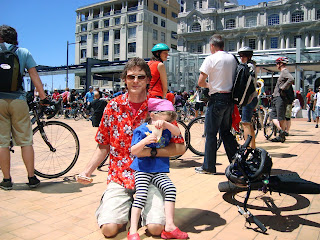 "You don't look at the camera and I'll eat a sandwich,
that'll make a good photo."
Waiting around for the start in Betty Winsdor Square.
On Saturday I packed the Midget Assassin, Pugsley and bike-trailer into the car and we headed over to downtown Auckland for The 350 Big Bike Ride. Kind of ironic that I had to drive to a climate change rally but it highlights the woeful situation bike commuters face living on the North Shore. I'm denied access to the only harbour crossing, there is no provision for bikes on the bus network and the ferry is a long way away, sails infrequently in the weekend and is expensive. I also doubt I could maneuver our road-train down the gang-plank successfully.
Any initiative to start cleaning up the planet has got to be good, right? But for me it was more an opportunity to ride around the city in safety and show my support for urban cycling. Cycling has been getting more than enough bad publicity lately in NZ and there is lots of bad will among the general public towards cyclists in New Zealand at present.
The ride started in Queen Elizabeth II Square at the bottom of town and the group of two or three hundred (best guess) sailed off up Queen Street on a beautiful spring day. What a different experience it is to ride in a group. I certainly felt the safety in numbers phenomenon as we cruised along soaking up the vibe of the city.
The riders were a real cross-section of society but maybe biased a little towards the save the whales and university student end of things. There were lots of families with children of all ages and the most fixed-gear riders I have seen in one place. It was also pleasing to see the Lycra-Cowboys that attended smiling and having a good time as I had always assumed the constrictive shorts prevented those facial expressions.
We left the procession near the end of the route and headed back to Ponsonby for a well-earned beer with friends as the ride carried on to the 350 festival at Mt Eden. The Midget-Assassin had been very well behaved to this point and I didn't want to push my luck. It was a great afternoon to be on a bike! 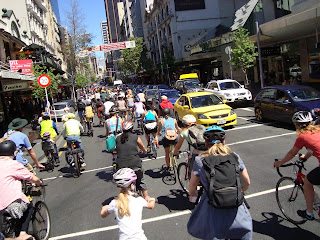 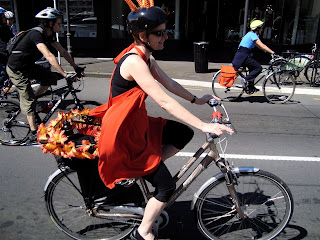 Unity Finesmith of Auckland Cycle Chic frocking it in style. 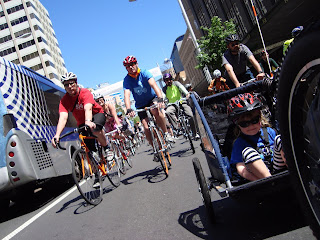 The Midget-Assassin cruising back down Queen Street. 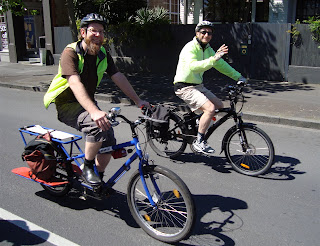 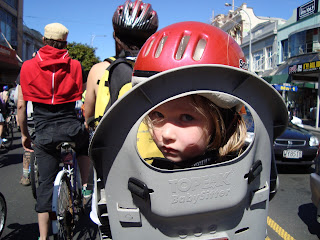 "What you look'n at mista?" 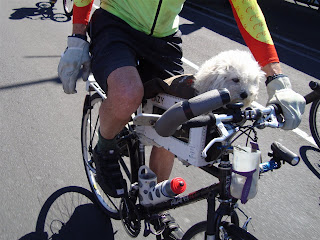 Every conceivable accessory including the family pooch. 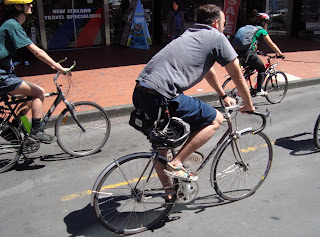 Older guy, singlespeed (fixie?), elegant steel frame with fenders. Got my vote for cool-bike-of-the-day but was harassed with a few no-helmet comments from pedestrians. 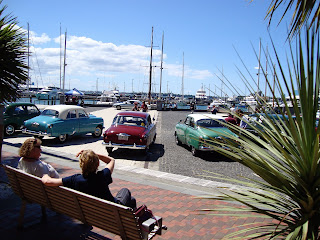 Classic cars in the viaduct. They looked great but it amuses me how very average cars become "classics" if they make it to retirement. 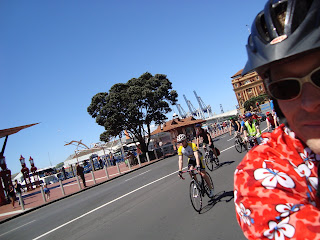 "Shush, Lycra-Cowboys on the waterfront." 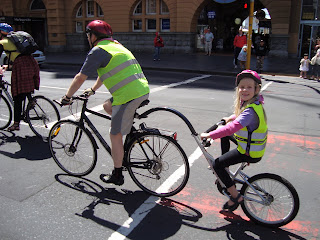 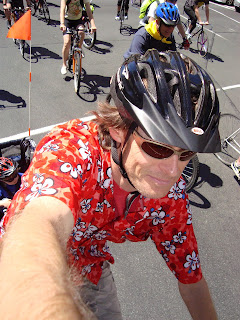 Sorry about the shirt. 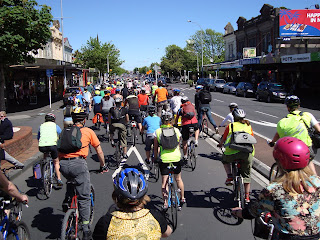 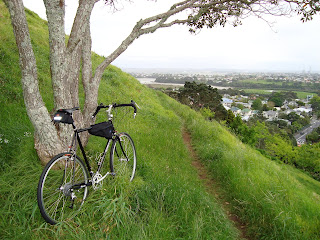 Riding the singletrack down Mt Victoria
I finally got out for a decent ride on the Cross-Check. Only 30kms or so but it included some gravel paths, grass, cobbles and singletrack. I changed over to some cheap Vittoria 35c touring tyres I bought when I first had the wheels built-up. I can't imagine what a 23 or 25mm racing tyre feels like at 130psi as these seemed pretty harsh to me at 65psi. On the Pugsley and to some extent my commuter with its 2 inch Schwalbes you just can't feel the pebbles and cracks that pass under your wheels but by the end of this ride I was getting used to the sensation.
It sure is different riding a faster bike on the road. Because I had those higher gears available I was blasting along with the roadies on the flats and also pedaling on the downhills so my legs never got a break. I'm sitting here the day after with sore quads and I never feel anything anywhere after a two or three hour mountainbike ride.
On fine, smooth gravel it was comfortable but I could feel the vibration through the bars when the rocks got up to matchbox size. Maybe I should double-wrap my bars or wear gloves?
The fun part started when I got to Devonport. I climbed up Mount Victoria using the sealed access road. This is a struggle on the Pugsley even when I am fit. It was way easier on the Cross-Check but I still ended up in my lowest 34/34T ratio. You can see most of Auckland from up there and I took in the views before starting down again on the singletrack that winds around the outside. I was careering down the initial part on damp grass (at Pugsley speed) when I hit the brakes to slow for the first switchback.
Road Tyres + Wet Grass = Chocolate Starfish Moment
The Paul cantilevers stopped the wheels beautifully but the smooth tyres weren't slowing the bike at all. I just pulled-up in time to avoid shooting over the precipice and took the next section considerably slower. I have to remember that when using road tyres this is an "exploring" bike not a "race" one.
I don't commute to work in rush-hour and on this ride really noticed the vehicle fumes on a busy Saturday morning. It was pretty disgusting in places and I'll head in the other direction in search of quieter roads next time I get a chance.
The drop handlebars don't feel natural yet but the gear-changing is coming easier. More miles required I feel. 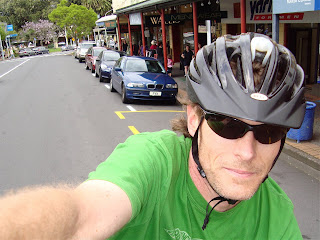 You would think there was no traffic in Auckland in this shot.
You would be wrong. 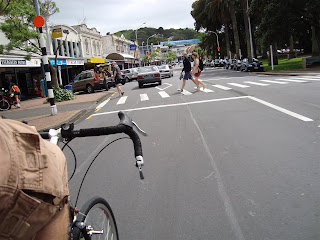 Heading up Devonport's Main Street from the wharf towards Mt Victoria
A few kilometres from home I spied a perfectly good pair of plastic oars sitting in someone's inorganic collection at the side of the road. I had no rack, bungies of trailer so I plonked them on the bars sitting across the hoods and carried on. I got full ten metres before the left paddle hit the wing-mirror of a fancy-pants BMW and I had my second choco-starfish moment of the day.
I sure got some funny looks from people as I rode home and overtaking cars gave me an extra-wide berth. I'm tempted to always ride with a fluorescent yellow paddle sticking out a metre into the traffic - much safer! 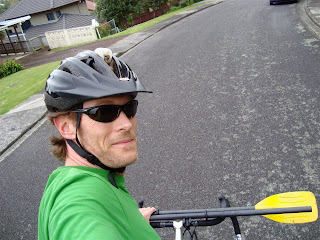 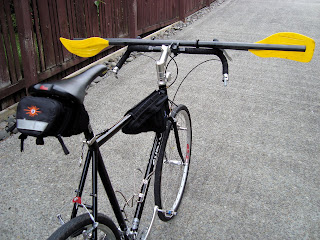 My new bike is oarsome
On a final note, roadies sure don't like it when you can ride at their pace in a t-shirt and baggy, shit-brown cargo shorts. I'm sure going to enjoy irritating Lycra-Cowboys on this bike. Just need to get a bit fitter so I can pull away from them for the ultimate humiliation.
Posted by Antoine at 1:42 PM 6 comments:

I want to ride my bicycle!

I'm itching to get a proper ride in on the new bike but just haven't had the opportunity since building it up. Just a few commutes to work and errands around the neighbourhood so far.
I got the indexing working on the second attempt and taped the bars when I was happy with the positioning of everything. I hadn't wrapped drops since my 10-Speed days as a teenager but made a reasonable job of it. I'll give myself an 8 out of 10 with some room for improvement. 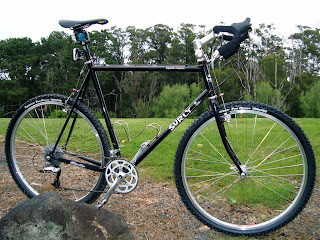 The fat 45c Panaracer FireCross tyres are a tight fit but are awesome off-road. I will get some skinnier cross tyres at a later date or possibly some Schwalbe Marathons that will work better on pavement "and" dirt. The FireCrosses are deadly slow on the road, even inflated to the maximum 85psi. They have an aggressive, widely-spaced motocross-style tread and hum like a 4WD tyre on the tarmac. I wanted the fattest tyre possible for a couple of mountainbike races next year so I'm happy with the purchase, just wondering if there is a fat alternative that performs better on the road. I have put on some cheaper Vittoria 35c rando tyres since these photos were taken and it's rolling a lot faster now. 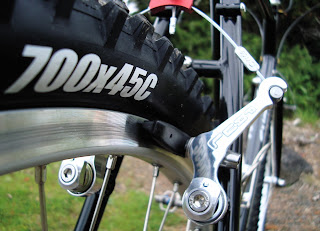 The Paul brakes are very powerful compared to the old Shimano canti's on my Avanti commuter. In the dry they feel as strong as the discs on the Pug but maybe with a little less modulation.
The bar-end shifters are taking a little while to get used to. Shifting is easily accomplished but I still have to think about each shift if you know what I mean, not intuitive yet. I hope that comes with time.
More pics when I can ditch the kids and if it ever stops raining. That could be easier said than done.
Posted by Antoine at 3:11 AM 5 comments:

I had a day off work on Thursday as it's school holiday time and after shipping The Midget Assassin off to daycare the boys and I headed out to Woodhill for a ride in the forest. Spring in Auckland has been very wet and I was determined to make the best of an overcast but dry day.
We normally ride with other families in our street but it was nice for a change just having the three of us. It would be better still if the girls could join us but at three The Midget Assassin is still on training wheels. As it happened we met up with some friends at one of the trail-heads and rode with them for a while. 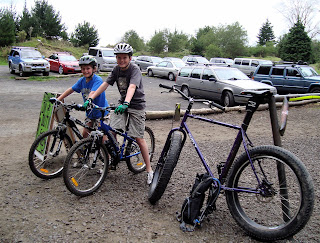 Someone needs a bigger bike 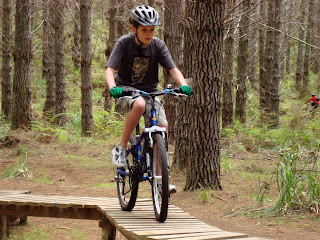 Thing-One led the way on the structures 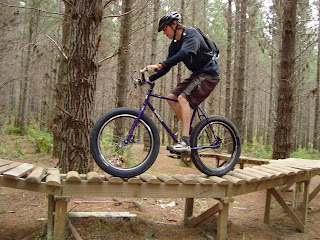 I managed not to hurt myself... 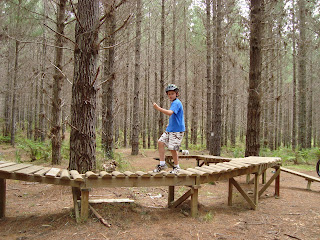 but the youngest rider preferred dancing.
When I mail-ordered the last parts for the Cross-Check I got some flat BMX pedals for the Pugsley. Most of my riding is around the neighbourhood or along the beach and I don't need to be clipped-in. It's nice just jumping on wearing whatever footwear you happen to have on at the time. The Crank Brothers Mallets I had on there are a platform style with the "eggbeater" mechanism in the middle, but they were never comfortable with casual shoes as the eggbeater sat proud and you could feel it through the sole of your shoe. The new ones are Magnesium Wellgo MG-1s and they are very light and comfortable. Not so good on the fast and bumpy stuff but it was nice not being clipped-in when riding the structures.
There's always a groan when I say we're going cycling. I live in hope that with dad being such a fanatic the habit would catch-on but the boy's bikes sit in the garage for weeks at a time until I bribe them into a ride. Once we actually get going however they never fail to have a good time so they might pick-up the habit when they get a bit older.
When I was their age my bike and skateboard were tickets to freedom and I couldn't wait to hit the streets. I would ride just for the sake of it with no particular destination in mind - I still do!
Posted by Antoine at 2:45 AM 3 comments: