In-between the spring storms we're finally getting some warm sunny days. I haven't been mountainbiking or beach-riding in weeks but have enjoyed commuting to work as usual and pootling around town with The Midget Assassin in tow. 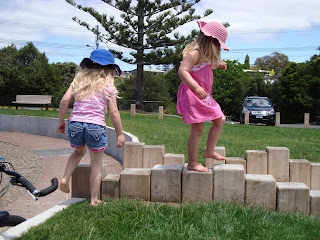 I took one of these girls home from the park
(hope I got the right one)
The school unicycle club got invited to three Santa parades this year. The boys and I weren't able to go to any of them last year so we made the most of it this time and attended two. The first was a low-key community affair up in Orewa. Thing-Two and I did that one and it was a good introduction to parade riding. Only a few thousand people so we were more excited than nervous and the route was nice and flat for the dad who doesn't practice. The second was the Farmer's Santa Parade in downtown Auckland. This was a much bigger deal with 250,000 spectators and some really professional looking floats. We wear blue club t-shirts and big red cowboy hats so we don't look as spectacular as some of the fancy costumes but the crowd doesn't seem to mind. Children just love to see other children riding unicycles and clap and cheer like mad, it's a real buzz. Some of the smaller riders were pretty tired by the end but everyone had a ball and the lanky forty-three year old can't wait to go back next year either! 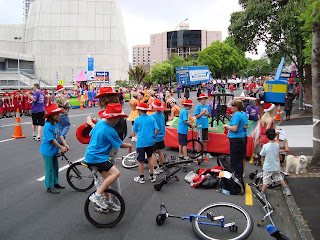 Waiting for the rest of the group before the start
Our local council held a Family Bike Fest in Sunnynook Park only a few miles from home. I dragged my boys kicking and screaming away from the Xbox and we rode over the hill to see what was happening. Well, what a well-run event, it turned out to be a lot of fun. Lots of activities based around bike-handling and safety and unicycle.co.nz had many and varied contraptions there for people to try out. My boys always get a kick out of being the only ones able to ride them, although a few children had a go on the custom made penny-farthing. 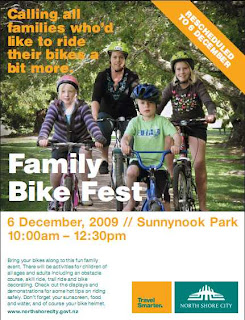 Our family almost cleaned-up in the slow-races. Thing-Two won his age-group, Thing-One just put a foot down before the finish to claim second place and I won the dad's race. It was very hard to actually keep moving and not just do a track-stand. Every time the commentator would remind us we were not moving I momentarily released the front brake so my wheel would move an inch or two. So we rode away after a couple of entertaining hours with $40 in bike-shop vouchers, candy, stickers, a flouro-vest each (yay) and a nice cycling shirt. 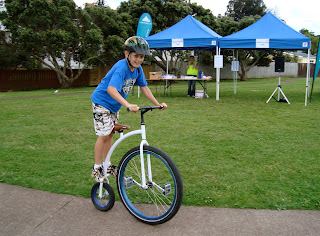 Thing-Two gettn' jiggy on the penny 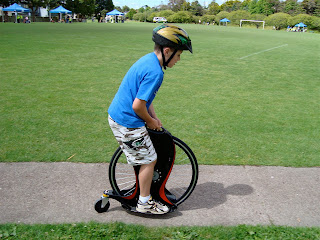 This contraption was just weird 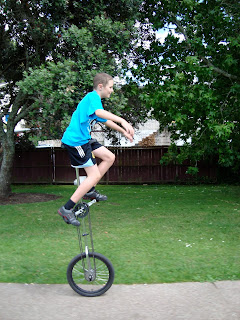 Thing-One on the giraffe
On Sunday I got a couple of hours to myself to get out on the Cross-Check. I'm loving the speed of the thing but still need to tweak my cockpit a little, especially for riding off-road. I'm going to rotate the bars a little more and move the brakes to get a flatter area behind the hoods for my palms to rest and an extra layer of bar-wrap is also on the agenda. The other problem I'm having is the axle sliding forward on the drive-side so my wheel ends-up crooked and the brakes start rubbing. This has happened twice - both times after tearing down the side of Mount Victoria on the singletrack. It's quite bumpy on 35mm road tyres and my watch was hurting my wrist as it jumped around with the impacts. I have the quick-release done up pretty damn tight so I'm not sure how to remedy this problem. It may come right as the powdercoat wears off the drop-out face and the quick-release gets some steel to bite into. I must remember to wipe any grease off the dropouts before I go out again. The Lycra-Cowboys were all off drinking Babycham somewhere so I had the road to myself. It was a great ride. 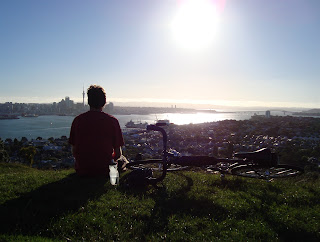 Facing west on top of Mount Victoria in Devonport. Time to head home before the sun gets much lower.
Posted by Antoine at 12:11 AM

one of a few blogs im reading where the weathers warm this now...
the US has snow,we have freezing fog and cold damp weather,
be our turn in 6 months time!

The whole unicycle thing is just facinating to me. What a cool activity to share with your kids.

A slipping rear wheel is the price we have to pay for having such amazingly strong quads! Can't get away from it with horizontal drop outs and high torque pedaling. It's what you get when you ride inappropriate bikes!

@coastkid: You have to wait another 6 months for the 6 weeks of Scottish summer ;^)

@Doug: I'm making the most of it before pear-pressure tells them it's no-longer cool, although I think the extreme trials riding and Muni earns a bit of respect from the teenagers.

@CT: Maybe it's shifting as I grunt up the mountain on the road and not down the singletrack on the way down? It is the steepest grade I ride.

Yes, definitely the uphill grunting. You just have to remember to check it now and then.

Very cool the family is involved in all the biking:)

Can you put a tensioner on the dropout?