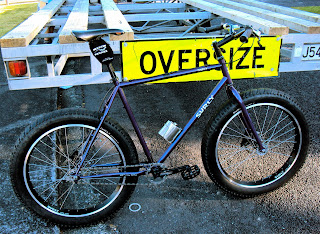 I've always been curious what the Pugsley weighed but have been a little shy to ask down at the the bike-shop to use their scales. I mean, it's like a public weigh-in for the poor girl and she's always going to be the heaviest one in the room.
I managed to jury-rig something on the bike-rack with some bathroom scales, a kitchen chopping board, a towel and some duct-tape (much to my wife's amusement) and was pleasantly surprised with the fat girl's results. She's a positively svelte 34.4lbs (15.6kg). 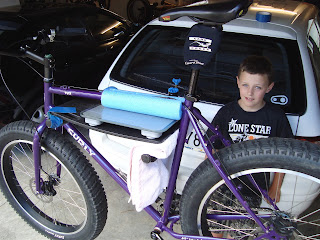 Getting ready to catch Mum's scales when everything collapses
I've spent the last four years telling everyone she was 36lbs, a total guess from figures I had seen on the internet. Apart from the Syntace stem and magnesium pedals there are no lightweight parts on there, it was specced for strength and longevity after all. With a normal seatpost and some 29er tubes I could get her down to 34lbs, but I like her just the way she is. "Warmth in winter, shade in summer" as my father used to say.
All I've had to replace in four years is a couple of sets of brakepads and a chain. A very reliable bike! 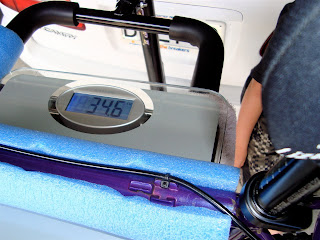 I ride singlespeeds cause they're lighter
As I had the Cross-Check all set-up with knobblies and a suspension seatpost for mountainbiking tomorrow, a shakedown for the upcoming DUAL, I chucked that up on the scales too and got 26.4lbs (12kg).
I'm pretty happy with that weight. She's built strong with 36-spoke wheels, MTB hubs and wearing a Thudbuster seatpost that weighs half a kilo on it's own. As I've been jumping steps and bunnyhopping ditches of late I'm happy with those build decisions. Tough components for trail-riding and loaded-touring was the idea.
Posted by Antoine at 6:30 PM

Nice post!!
we have a barrel (picture 55 gallon drum), scale at work and i plan on seeing what my Fatty weighs, when i finally get her.
hopefully by mid-week!!?

Thanks Joboo. I'm looking forward to some pictures of your ride too.

My Pugs has been a little ignored of late as I get the new arrival sorted, but that will change soon. Too much fun not to be ridden.

Nice contraption for getting the weight! =)

I did the 'weight my-self' with and without holding the pug and calculated the bike weight. ~15.3kg with flatties.

That's what I should have done Harri.

my pug wieghed 34.5 lbs when it was built minus pedals,but as we all know they dont feel as heavy once on soft stuff!...