A few little firsts on today's ride;
1. I scored a Cateye computer when I bought my eldest a new mountainbike just before Christmas. I want him concentrating on the tree he's going to hit, not looking at his terminal velocity as he's doing it. With a 50km race coming up I'm curious how many miles I'm riding so I put it on the Cross-Check in the interim. It might stay on there for good but I find pootas a bit distracting and am not usually fussed how fast or how far I'm going. On its debut I discovered that I ride very slowly and not very far!
2. I like the Eggbeater clipless pedals I got for this bike but the thin hard soles of my cycling shoes and the amount I'm riding in them is aggravating my trashed ankle. A fixed position on the pedal and lots of impacts with no cushioning is not ideal when you have no cartilage and a couple of snapped ligaments. It's also a pain having to wear bike-specific shoes when I ride to work so I've put on BMX platforms from The Nasty Evil Bike (MTB commuter) to see how they go in day to day use.
Since changing over to platform pedals on the Pugsley I've loved just hopping on and riding with whatever footwear I happen to have on at the time. I think I'll save my clipless pedals for racing or long rides until I get some more forgiving cycling shoes.
3. The Cross-Check got its first application of dog-shit and consequently it's first wash. What is it with these people? I like dogs but come on, clean up after your pets guys. The next dog owner I see breaking the law I'm going to follow home and drop a big steamer on their front lawn and see how they like it. It's only right!
4. I took this bike for it's maiden ride along the cliff path between Kennedy Park and Castor Bay not far from my home. It's only a few hundred metres long but the views of the harbour are outstanding and hardly anyone knows the path is even there. The point overlooking the bay at the southern end of it was a former Maori pā (fortification). There's not much evidence of that now, just a few pits and mounds, but the local council have constructed a cheesy-looking imitation of the wooden defenses that would have been there and used them as fences on the cliff edge. There's a photo of some of that below with what must be the most basic carving I have ever encountered. Still, they gave it a try.
I was disappointed to find that the rough gravel road down to the beach at the end has been concreted over, I used to enjoy sliding down there.
5. I'm getting more confident riding technical sections on this bike. The bit I struggled with is when you're in the drops riding downhill, it's steep and you're braking, but you have to loft the front wheel to clear a ditch or log for instance. Wheelying in the drops with your bum sticking up in the air was not coming naturally but with a combination of brute strength, more speed and half-hearted bravery I managed to clean an entire trail that's had me hopping off the bike a couple of times in the past. With the Pugsley I just bomb over everything. This one takes a little more planning and finesse. 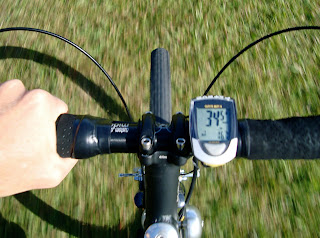 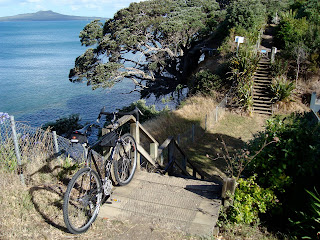 I have to shoulder the bike over this section. Needless to say I don't ride the Pugsley along here very often. 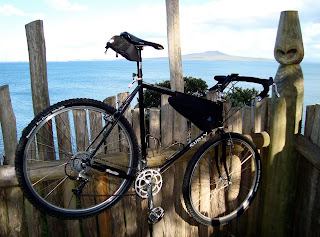 High on the cliffs above Castor Bay overlooking Rangitoto 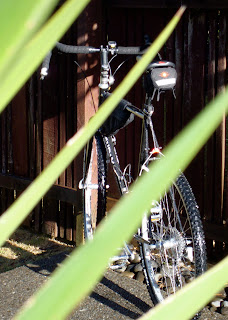 Freshly hosed-off with no trace of poo
Posted by Antoine at 9:00 PM

I agree about the little (sometimes not so little) dog bombs!! While the snow melts in the spring is the worst along the Mesabi Trail (soon to be 175 mile paved trail) here in northern Mn. I ride this trail a lot until things dry out, during our spring, and the dog crap is every where. It's gross and the owners of these dogs are just plan lazy!!! Come on man!!!!