My local loop - The missing photos

The holiday period has seen me on my bike a lot more than usual. With my wife not working I've been able to duck out for a few hours here and there and start to get my legs in shape for the The DUAL at the end of march.
Today when doing my usual loop I took the camera to capture some of the places I missed when my battery died on the last ride of 2009.
I only rode for two and a half hours today but got quite a work-out as the rolling resistance on those knobbly Panaracers is something else on the tarmac. They make a thrumming sound like a 4WD tyre on the road and it actually feels like you're riding with your brakes rubbing. Once you venture off-road they roll fine and provide a welcome bit of cush through the bars. 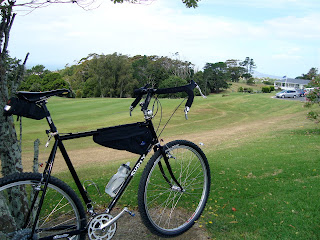 Overlooking Pupuke Golf Course. My house is about 1.5 kms past those trees and probably 200m closer to sea-level. I never ride on the fairways during the day, only late at night when I'm coming home from work. It is public land and you are entitled to use it, but I don't fancy collecting a golf-ball in the side of the head. 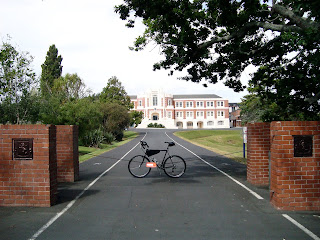 My old high-school, Takapuna Grammar. It's an impressive looking building and despite the name is a public school for everyday people. Funny how in England they call "private" schools "public", I've never understood that one.
My mother died in the Mount Erebus crash the first year I was there so it doesn't hold many happy memories for me. Wagging school to smoke dope and make home-brew under my friend's house was probably the highlight. 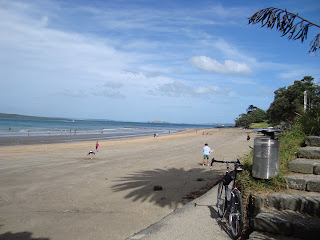 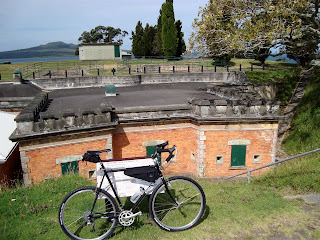 Fort Takapuna. This wonderful old command-centre is built below ground level for protection from naval artillery. There are several gun emplacements on the cliff edge in the distance. Most of these european fortifications like North Head and Mount Victoria were also Maori ones in the centuries beforehand. 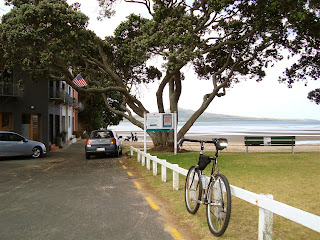 Cheltenham Beach. Nice town-houses, but with your front door about a metre above the high-tide line I'd be looking for alternative accommodation when the next Tsunami hits. 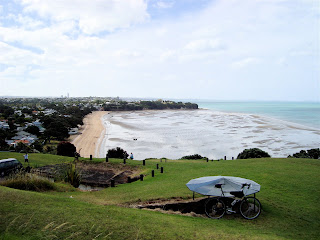 Cheltenham Beach again viewed from halfway up North Head. Half an hour from low tide. View large and you can see the previous town-houses at the end of the beach. 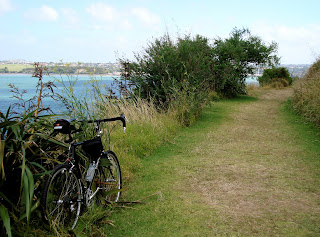 One of the smoother tracks on North Head. Great riding but you have to watch out for walkers. 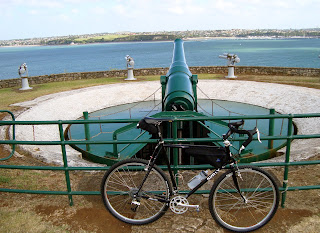 The last remaining "disappearing gun" on North Head. Most of the artillery was melted down for scrap. There are lots of tunnels connected to this that you can explore. As a teenager we would wait in the darkness for mothers with young children to walk in from the sunlight and then blast them mercilessly with our pea-shooters before their eyes adjusted. Screaming kids would run in all directions and the mothers would often cower in fear or start crying. There is nothing as ruthless or cruel as thirteen year old boys! 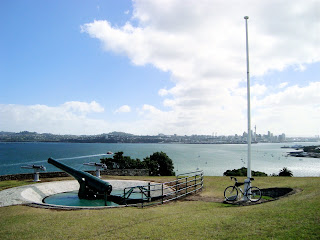 Downtown Auckland in the distance across the harbour. 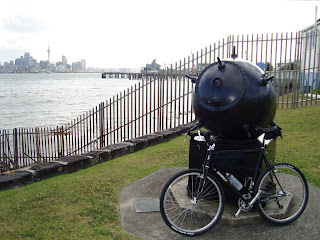 The Devonport Naval Base. 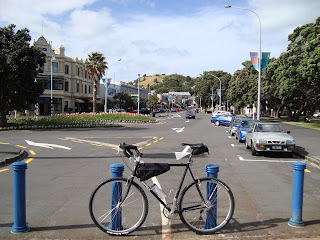 Victoria Road, Devonport's main street, with Mount Victoria in the background. We spent our wedding night in that hotel on the corner. It apparently overlooks Devonport wharf and the harbour but I don't remember the view.
I just love Devonport to bits. The yuppies are slowly taking over as property prices are sky-high, but it is still very charming and holds a lot of appeal.
I rode a considerable amount of grass today and sections of sand, shell, gravel and dirt. The bike was very comfortable and sure-footed. I wouldn't say no to a lightweight road-bike but this kind of all-rounder is so versatile and immense fun. I love the fact that I can jump a curb or ride down a flight of stairs if it takes my fancy. That's the mountainbiker in me talking. Just as well I built this thing with 36-spoke wheels ;^)
Posted by Antoine at 1:20 AM

antonine whats the frame bag you have on your CC?...
be cool to see more pics of some of those old coastal defences...
having been hit twice at work with golf balls i dont recommend it!,imagine cycling on fairways here!..the gentry would have a heart attack!,ive been all over the course last week in the snow though on the pug!

Great posting and tour of the local route, although I'm sorry to read of your mother's death.

@coastkid: Frame-bag is a Jandd. I mail-ordered it from the States with some parts when I was building the Pugsley. Good size and location for quick access to camera, snacks and phone with enough room for keys and a pump. It's handy on the Pugs because a seat-bag doesn't fit to well with a Thudbuster suspension post.

looking for a bag like that for the KM and maybe use my epic design tankbag ontop,,want a bag leaving both bottle cages and ability to shoulder carry..will check it out..thanks

@coastkid: You would have to modify the velcro closure at the top to use a tank-bag as it is one long flap that goes along the top tube.

Antoine-You definitely live in a beautiful country. Love the pictures!

coastkid-I use the Jandd bag with an Epic Designs tank bag. It fits fairly well, didn't have to modify.

Thanks Marla. Auckland has some nice scenery for a city of one million and thanks for the heads-up on the tank-bag combo.

Glad you like the photos as it takes ages for them to upload, even at this reduced size.